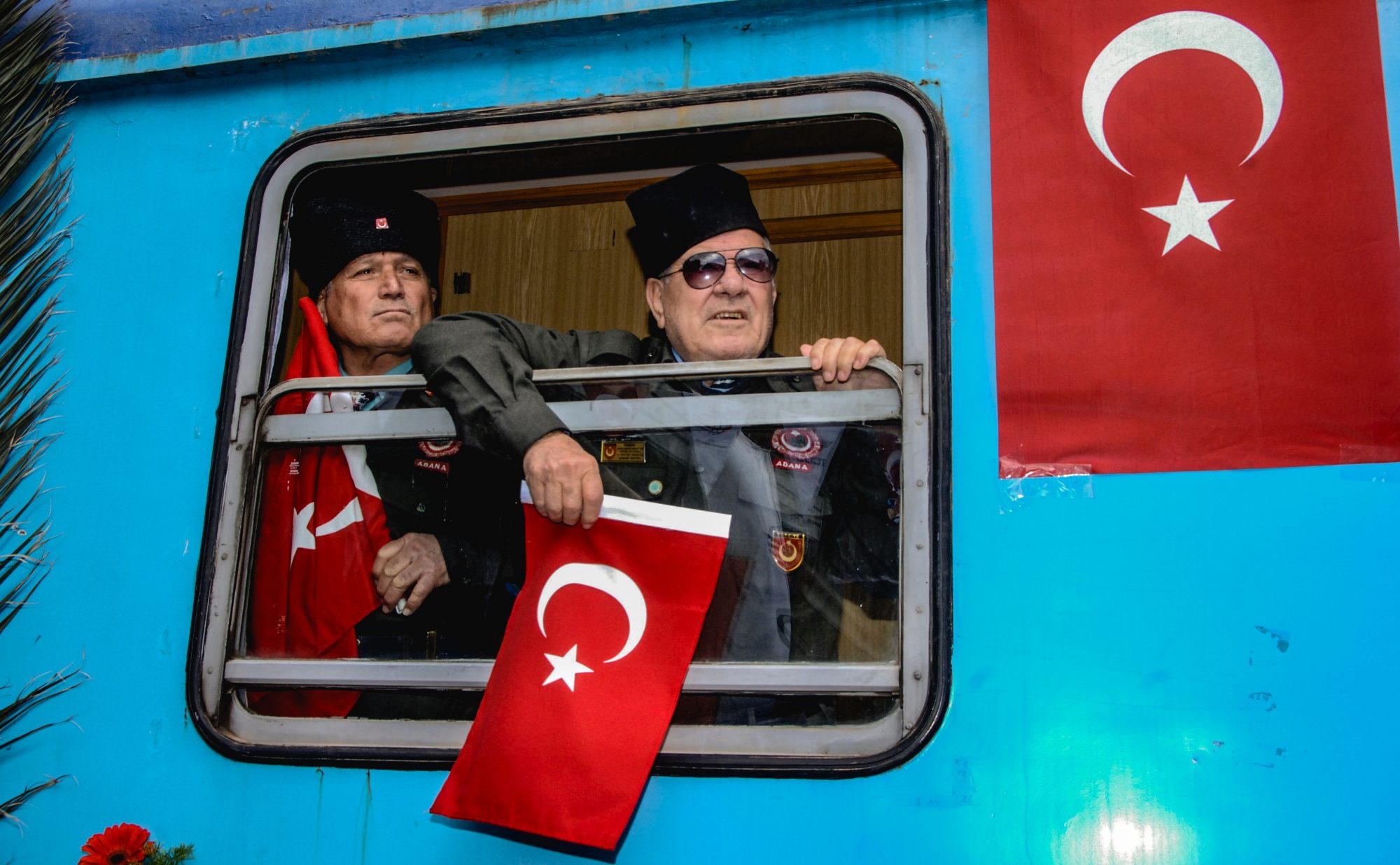 The president of Turkey, Recep Tayyip Erdoğan has transformed the politics of his country. Islam and more aggressive foreign policy are now in the forefront of Turkish politics. Tutkain’s Mohammed S. Hadi analyses the key phenomena in contemporary Turkish history in relation to the political ideology of Erdoğan and his compatriots.

Many of us might be familiar with the active Turkish role in the Middle East today. Indeed, the Turkish intervention in Syria has gained a worldwide interest, especially after the launching of the Turkish military operation in Afrin, Operation Olive Branch, in January 2018. This may create the illusion that Turkey has always been this crucial key player in the region. Exploring history exposes us to a different reality of an unconfident nation, which has not managed to gather itself until recently.

The Turks were smashed in the First World War. The old Ottoman Empire was divided into new nation-states, upon which new geopolitical realities were created in the Middle East. Turkey’s painful experience in the Turkish War of Independence (1919–1922) had its own impacts on the modification of the foreign policy behaviour of the new republic. The young state, which was mainly the creation of a single individual, Mustafa Kemal Atatürk, focused on tearing down every single link that might have bound it to the old Ottoman heritage.

The caliphate was abolished and the caliph was exiled to Italy, Arabic alphabet and numbers were discarded in favour of the Latin alphabet and religious schools were closed, while women were banned from wearing head veils in official departments. An extreme form of secularism, laicism, was adopted by Atatürk, who saw that the rise of Turkey would remain incomplete if Islam and Ottomanism were not forced to step down. Atatürk and his narrow elitist circle, known as the Kemalists, believed that in order for Turkey to catch up with the developed world, it had to have state control over religious expression and a single party regime; therefore, the People’s Republican Party (CHP) was founded. From then to the 1950s, the Republican party would remain in power, having a major effect on the process of shaping Turkey’s foreign policy behaviour.

Territorial regression, which had to be experienced in Turkey during the aftermath of the First World War, played a major role in the formation of Turkey’s modern world view. While it remained unaggressive, a xenophobic vision of Turkey’s geographic neighbourhood was adopted by Kemalists, who felt suspicious toward the intentions of the rest of the world. Every single neighbour of Turkey was regarded as a potential threat to its own sovereignty. This was perhaps the main reason behind Turkey’s systematic disintegration from the regional system of the Middle East.

”The ethno-nationalist Turkish elite dismissed any expansionary ambition, which was a frequent character of their country’s predecessor.”

On the other hand, while Europe was viewed as a role model, it did not enjoy a better position in the Kemalist foreign policy doctrine. Russia, against whom the Ottomans had fought on twelve different occasions, did not enjoy a better position and was profiled as the most existential threat that Turkey might have to face. The ethno-nationalist Turkish elite dismissed any expansionary ambition, which was a frequent character of their country’s predecessor.  Instead they worked on securing Turkey’s intimate neighbourhood throughout a series of non-aggression treaties and pacts to ensure a peaceful transition of power within the region.

This isolationist foreign policy proved its efficiency as Turkey managed to disengage itself form the Second World War, until the very end. Driven by the fear of Stalin’s Soviet Union, Turkey finally decided adjust its foreign policy by allying itself with the west. The post-World War II reality encouraged Turkey to accept the Marshall aid, join the council of Europe and participate in forming the North Atlantic Treaty Organization (NATO). Simultaneously, Turkey experienced domestic changes in its decision-making process. A pluralistic system was adopted, and for the first time in modern Turkish history a party other than the CHP was able to shape Turkey’s foreign policy. The Democratic Party, which introduced itself as an alternative to CHP’s policies, ruled throughout the 1950s and had closer relations with the West.

Meanwhile, Turkey gained a bad reputation in the Arab world. Arab nationalists led by Egypt’s Nasser regarded Turkey as a tool of Western imperialism in the region, especially after two incidents: the formation of the Baghdad Pact, a Middle Eastern version of NATO, and the Turkish green light for the U.S. Air Force to use Incirlik air base during the Lebanon crisis of 1958. In addition, Turkey was the first country in the region to establish permanent diplomatic relations with the state of Israel.

A new orientation of foreign policy behaviour started to rise in the 1970s. Religious circles, which had been marginalized by Kemalists since 1923, began to regain their position within the system.  The rise in the price of oil after 1973 allowed these groups to re-engage Turkey with the rest of the Middle East throughout the strong transnational networks that the Islamists enjoy all over the Middle East in comparison to the rest of Turkey’s political parties. Relations with Saudi Arabia and many other regional powers began to strengthen, while relations with the West entered a period of recession after Turkey’s invasion of Cyprus in 1974. For more than two decades Necmettin Erbakan was the main figure of this narrative. With his fall in 1997 a new religious elite lead by Recep Tayyip Erdoğan and Abdullah Gül would decide the fate of Turkey’s relations with the rest of the world.

”…it was Erdoğan and his companions at the Justice and Development Party (AKP) who have had the most influential role in transforming Turkey from a trivial state into a member of the G20.”

The Rise of Neo-Ottomanism

The collapse of the Soviet Union brought new challenges, into which Turkey’s foreign policy had to assimilate. All of a sudden Turkey found itself in a chaotic environment. The power vacuum caused by the fall of the Soviets, the Bosnian war in the Balkans, the conflict over Nagorno-Karabakh in the Caucasus and the war over Iraq in 1991 encouraged Turkey to take an active role within the region. At the same time Turkey experienced many economic and political reformations, which were mainly initiated by Turkey’s president Turgut Özal, to whom the neo-Ottomanist orientation can be traced.

While Özal might have triggered the beginning of a new era it was Erdoğan and his companions at the Justice and Development Party (AKP) who have had the most influential role in transforming Turkey from a trivial state into a member of the G20.  Indeed, since AKP’s rise to power in 2002 Turkey’s GPD has increased from 200 billion USD to 950 billion USD in 2013. In addition to economic prosperity, Turkey has experienced a major shift in its regional status. Since the invasion of Iraq in 2003 AKP has been engaging actively in the Middle East, as well as in the Balkans, Caucasus and Central Asia. This engagement was justified as a preventive Turkish approach towards any unbalance of power that might be caused by its accumulation in the hands of Iran or Saudi Arabia.

During the period between 2004 and 2015, Turkey watched itself as it was transforming from an isolated minor power into a major key player with a tremendous amount of soft power and leverage over its neighbours. For example, Turkey managed to arrange a summit for the neighbouring countries of Iraq, during Iraq’s civil war, in order to agree on a consolidated policy toward the country and to prevent any attempt to divide it. Turkey also managed to elect its candidate for the secretary-general of the Organisation of Islamic Cooperation, which it has exploited as a platform to influence the rest of the Muslim majority countries from 2004 to 2014.

Turkey has also managed to gain a reputation as a mediator between the different antagonists within the region. The long non-interventionist Turkish policy in the Middle East has allowed it to brand itself as an unbiased and trustworthy arbitrator. The highpoint of this policy was in 2008, when Turkey managed to organize indirect negotiations between Israel and Syria, before they were suspended after the war over Gaza of 2008.

If there is a single man that could be regarded as the main intellectual source of post-2003 Turkish foreign policy, it would be the former foreign and prime minister Ahmet Davutoğlu. In his book The Strategic Depth (2001), Davutoğlu explain his views over what kind of foreign policy behaviour Turkey should commit itself to. First, Turkey must reconcile itself with its own Ottoman heritage, by ending the cultural and epistemological break with its own past. In addition, Turkey must reintegrate itself systematically with the former Ottoman territories by exploiting its enormous cultural influence over these countries as a source of soft power politics. Finally, Turkey must recover its own self-confidence in terms of an extensive and initiative foreign policy, which was lost during the Kemalist era.

For Davutoğlu, Turkey must maintain and even strengthen its relations with Europe. Indeed, until recently, AKP was one of the main supporters for Turkish candidacy for membership in the European Union. According to international relations experts these are the main points of Neo-Ottomanist foreign policy. Davutoğlu believes that Turkey’s unique geopolitical location can allow it to transform itself into a key player in world politics, and not just within its proximate region. Davutoğlu’s Zero-Problem foreign policy, which has been adopted by AKP, aims to remove all sources of conflict between Turkey and its neighbours, in favour of coherent economic, cultural and strategic partnerships. The Turkish diplomatic victories in the 21st century’s first decade and a half will take a new turn after the rise of the Islamic State and failed coup attempts in 2014 and 2016.

”The last few years have seen a wave of high-budget Turkish drama shows, which share the subject of praising the Ottoman era.”

From Neo-Ottomanism to Ottomanist imperialism?

Since the creation of the modern Turkish state, Turkey has managed to keep its own guns out of the Middle East. Nevertheless, the rise of the Islamic State in Iraq and Syria, and the strengthened Kurdish position in both countries compelled Turkey to revive painful memories from the past. The aggressive Turkish behaviour towards the Kurds, comes in contrast to AKP’s doctrine of embracing Turkey’s diversity, which was introduced as an alternative to the tough Kemalist view of a single secular nationhood, without any recognition of other cultural rights.

In addition to its military operations in Syria, Turkey has managed to maintain a permanent military presence in northern Iraq since 2014. Furthermore, Turkey has established a military base in Somalia and signed military cooperation treaties with Sudan and Qatar. Turkey’s support for the Muslim Brotherhood in Egypt along with the new narrative adopted by AKP, aiming to promote an ambiguous form of Islamic unity lead by Turkey, raises questions about Turkey’s intentions. Finally, the revival of the Arabic language in Turkish schools (banned since 1923), the foundation of several Turkish media sources in Arabic and the bold Turkish tone toward Israeli actions in Palestine can be viewed as a Turkish endeavour to expand its leverage over the region.

According to an article published by Aljazeera.net, the revenues of Turkish drama exports has increased from 10 000 USD in 2004 to 380 million USD in 2015. The Arab world is regarded as one of the main consumers of this commodity. The last few years have seen a wave of high-budget Turkish drama shows, which share the subject of praising the Ottoman era.  While Iran is relying on its sectarianist identity, and Saudi Arabia on its petrodollars as sources of soft power, Turkey is invading the Middle East in this most invisible of ways.

Youssef, Emad (2015) Turkey: an ambitious strategy and a restricted policy

Several other articles and academic studies